A Look at How Recycled Water Is Made

It was a beautiful day when I toured the Silicon Valley Advanced Water Purification Center in north San Jose in late February—for the first time in a long time, sunny skies and no rain.

Operated by the Santa Clara Valley Water District (SCVWD), this facility is the largest advanced water purification plant in Northern California. It takes in wastewater that has already undergone a two-step treatment process at a neighboring plant. This treated wastewater would normally be discharged back into the Bay, but the Water Purification Center treats it further so that people can use it for nonpotable purposes—for things like irrigation and cooling industrial facilities, not drinking. The plant’s daily output is 8 million gallons of purified water that is then mixed with other recycled water and piped out to customers around the valley.

Eventually, by 2022, SCVWD would like to use the purified water to boost groundwater supplies.

The Water Purification Center was about seven years in the making and has been operational for three, since 2014. It’s a relatively small facility, and inside the main building, it’s brightly lit and feels spacious. A loud hum fills the air. There’s a faint smell of a clean swimming pool. The plant has few workers; while it doesn’t run itself, it’s not like a bustling factory with hundreds of people onsite.

The water the plant receives has already been cleaned twice, and it contains 800 milligrams per liter (mg/L) of total dissolved solids (TDS). TDS is one way to assess the purity of water; it’s a measurement of the total amount of dissolved substances like salts, minerals, and other substances in the water. Through its purification process, the plant produces water with TDS of 40 mg/L. In contrast, the EPA’s TDS standard for drinking water is 500 mg/L.

In reverse osmosis, a pump applies intense pressure to force water through a membrane with infinitesimally small holes—so small that only water molecules and little else can pass through. These membranes are also contained within tube-like vessels.

Reverse osmosis separates the purified water from the concentrate, which contains all the substances that have been removed from the water, like pesticides, viruses, salts, and the residue of pharmaceutical and beauty products.

However, this concentrate can be cycled through the system again, to wring even more purified water out of it. As much as 82% of the source water becomes purified through this process. Relatively little water is wasted.

UV light sterilizes the water, killing any living bacteria or other organism that remains. The UV light kills cells by damaging the DNA within.

You can think of recycled water as a new source of water that’s hiding in plain sight. Every day, we discharge wastewater into the Bay. But now that we have the technology to purify this water and make it useful again, perhaps this is more wasteful than we originally thought.

Orange County, for example, has been using recycled water to augment its groundwater since 2008. The county’s water and sanitation districts operate the world’s largest water recycling system for indirect potable reuse, which means that the recycled water is ultimately used for drinking, but not directly. After undergoing a similar microfiltration, reverse osmosis, and UV light purification process, the purified water is transported to percolation basins, where it eventually seeps underground into aquifers that Orange County uses for drinking water.

Recycled water has advantages over other alternative water sources. For one, it requires less energy to purify wastewater than seawater. Saltwater has TDS concentrations of 35,000-40,0000 mg/L; the treated wastewater that flows into the Silicon Valley Advanced Water Purification Center has TDS levels of 800 mg/L. Desalination requires much more energy and effort to bring that number down to an acceptable, drinkable level. In addition, at the Water Purification Center, the reverse osmosis pumps require 190 pounds per square inch (psi) of pressure to do their job; desalination can require up to 5,000 psi of pressure.

And then there are certain facts of life that make recycling water more attractive. Even after a soggy, rainy winter, Silicon Valley imports up to 55% of its water from the Sierra Nevada. The cost of that water is rising and its long-term reliability is in question, as climate change will likely reduce the mountain snowpack. Meanwhile, the population of the Bay Area may increase from 7.2 to 9.5 million by 2040. Unless we somehow learn how to live without water, it seems inevitable that we will have to rethink how we source and use water.

Luckily, according to a 2014 report by the Pacific Institute, there is a “tremendous” opportunity to increase water recycling in California. The report estimates that some 1.2 million to 1.8 million acre-feet of water could be reused each year, in addition to the 670,000 acre-feet of municipal wastewater that’s already being reused. (An acre-foot is the amount of water it takes to flood an acre of land one foot deep.)

Right now in California, recycled water can only be used for nonpotable (nondrinking) purposes and for some kinds of indirect potable reuse—like what Orange County is doing with their groundwater replenishment system.

However, in December, the State Water Resources Control Board released a study stating that it’s possible to develop regulations for direct potable reuse—adding recycled water directly into a drinking water supply, without an environmental barrier like the percolation basins used in Orange County. There’s no timeline for when these regulations might be proposed, let alone enacted, but it’s a significant step.

Allowing direct potable reuse would make California a leader in recycled water. According to the same study by the Water Resources Control Board, there are only two direct potable reuse projects in the world that are operated as permanent sources of water. One is in Namibia and the other is in Texas. Texas does not have regulations for direct potable reuse, but the project there was permitted on a site-specific basis when the community went through a major drought.

SCVWD offers free public tours of the Advanced Water Purification Center, which is located on Zanker Road in north San Jose. See http://purewater4u.org/ to sign up for a tour. 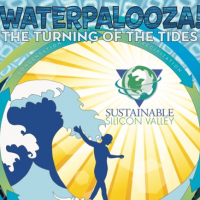 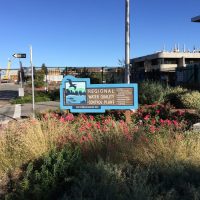 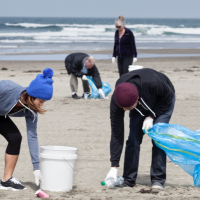 Got Coast? Clean it up!

Save the date: Rains to Bay - A Deep Watershed Dive

Save the date: Rains to Bay - A Deep Watershed Dive